Twenty two runners from the different nations and services here at ISAF registered for the twenty six plus mile run inside the compound. Marine Corps four star General John Allen, Commander ISAF addressed the runners just prior to the playing of the US National Anthem and posing for group photos. 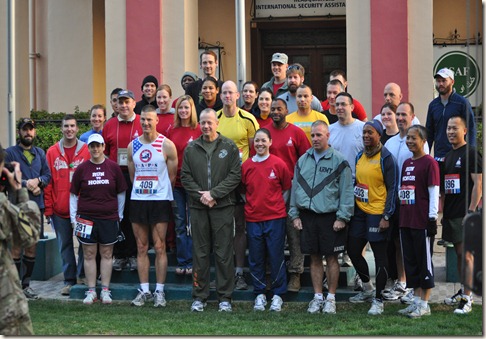 As noted by General Allen, the thirty five year old Marine Corps Marathon is the fifth largest marathon in the United States and the ninth largest race in the world. The MCM is THE largest marathon that awards no cash prizes. That little factoid didn’t dampen the enthusiasm of the racers waiting for the starting whistle.

Several participants were running for charity, one being the Tragedy Assistance Program for Survivors. The man ran in memory of Major Doug Zembiec, USMC who was killed 11 May 2007 while leading a raid in Baghdad, Iraq. 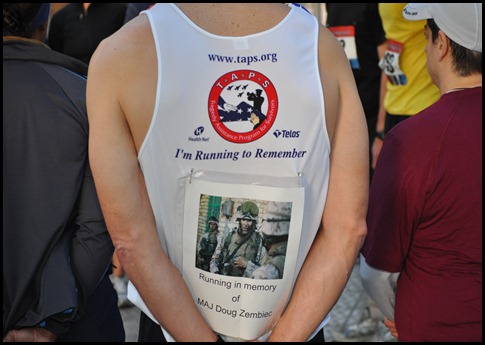 The first MCM Forward was held in 2006 at Al Asad Airbase which hosted 109 finishers. MCM Forward is the name given to any Marine Corp Marathon event held outside of the United States.

While the participants here at ISAF will make up just a small fraction of the overall number of runners in this year’s MCM, these twenty two racers run for the same feeling of accomplishment and pride of service and country that motivate all the others.