David Roentgen: This morning Jessica Ryerson is in the studio with us.

Just a little background on Ms. Ryerson before we begin; she is the lead character in the debut book, Jason to Jessica, by Starfox Howl. You’re Canadian, isn’t that right Ms. Ryerson?

Jessica: Please call me Jessica and yes, I was born Canadian. Since coming here I’ve taking the tests and am a naturalized citizen of the United States. Mom was a natural citizen of the United States before she met Dad and didn’t give up her US citizenship when they got married. After my father was killed in action, we couldn’t stay on at the Service base any longer, so we moved south, to Georgia.

David: How have you acclimated to your new country?

Jessica: It’s been great, David. The weather is much nicer down here. I never liked the cold or the snow. I know, sacrilege. The schools here are great. I’m currently enrolled in Emory’s Business school and my sister, Crystal, is looking to attend the University of Georgia in Athens once she graduates from high school.

David: Now, I would like to get this part correct, and I hope I don’t confuse any of our listeners here today. You were born male, is that correct?

Jessica: Yes, I was born Jason Ryerson, and was about as male as you could get.

David: And now you are female, is that right?

Jessica: I present myself as female, I dress and act female, but medically I fall into the category of intersexed. And I have a feeling of what your next question will be. No, I didn’t go to Sweden and have gender reassignment surgery. My gender change started with a car accident. I was seriously injured, as in ‘pray for a miracle that he survives’ type serious. MORFS was that miracle. The syndrome was triggered and it repaired my injuries.

Jason was air lifted to the hospital and Jessica woke up at home, completely recovered.

David: I can only imagine that the change has been a complete shock to you, your family and friends.

Jessica: A shock yes, but my generation have been living with the possibility of having this syndrome triggered. Medical science has advanced so that the original high death toll has been reduced to the point that MORFS is treated almost like a severe cold. It’s the aftermath now that is of most concern to parents and survivors.

My family has supported me without hesitation since my change. A lot of Jason’s friends couldn’t cope with his change and so we’ve gone our separate ways.

David: Now, about this book, Jason to Jessica, tell me about it.

Jessica: It’s a very good book, I think. It begins when I wake up at home and chronicles the trials and tribulations of a man suddenly having to face the world as a woman. Jason has to come to grips with not only being a woman, but being a beautiful woman in a world where brains and beauty are considered mutually exclusive.

David: And your co-star, what can you tell me about him.

Jessica: Mike Forrester, of the Forrester Industries Forresters, tall, handsome, yummy. He was best friends with Jason while they were in college together. He was also one of the friends that didn’t run away when Jessica came on the scene.

David: Are you two romantic in the book?

Jessica: David! I can’t give away the whole plot. Your listeners are just going to have to buy the book and find out. But I will tell you that David is involved with a lot of firsts with Jessica.

Jessica: It’s in the works now. There so much more story to tell.

David: Why don’t you tell us the title of the book again and where our listeners can purchase it.

Jessica: The book is called, Jason to Jessica, by Starfox Howl. And you can purchase it from the publisher’s website: www.eXtasy.com, Amazon.com, Fictionwise.com and other e-book stores online. 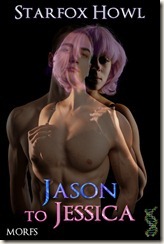