My publisher, eXtasy Books, has set a release date for my second book Angel’s Wings. It will be released on 15 February 2012. Hey, that’s just a couple of days from now! How about that!

Here’s a picture of the cover so you’ll recognize it. 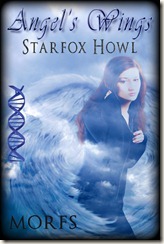 Angel’s Wings is the second story set in the MORFS story-verse.

My first book Jason To Jessica was described by one reader as ‘out there’. Angel’s Wings is a bit more down to earth.

The story revolves around Angel Sanderson, a young girl that was stricken by the MORFS syndrome when she turned ten years old. Now, five years later, she is struck a second time by MORFS and transformed again. This time into a beautiful teenaged girl, not with little butterfly wings, but with large angel wings that will allow her to soar.

When she returns to school, she meets Chris Adams, another flyer with a troubled past.

Angel also had to learn how to deal with the school bully, bigots and the normal upheavals of teenaged life.

I think you will enjoy the story.